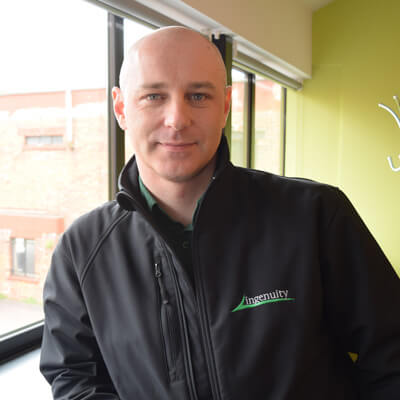 I am very grateful to the whole Navigator team for the way they handled this transaction. They oversaw the whole thing, made sure everything was in place, and made a stressful process as smooth as possible.

We helped Ian, who was going through a rapid business expansion, buy a new office using his pension.

Ian Laverty, MD of Ingenuity Business Management Consultants, is a brilliant management trainer. However, success brings its problems – his expansion meant that he needed a new office. Family and business capital commitments meant that he had nothing like enough money to buy what he wanted, and as a new-start business there was no chance of a reasonable bank deal.

There were two pieces of good news. One was that he had a deferred final salary pension with a large plc. The other was that he had seen a place he really liked and had a bid to buy it accepted.

The challenge was to get funds in place for Ian’s pension to buy the property within six weeks, the timescale requested by the vendor.

The first thing was to manage expectations. We felt that it was extremely unlikely that the pension fund would be able to complete within six weeks, and Ian was able to go back to the vendor’s agents with a more realistic timescale.

We started an analysis of Ian’s deferred pension, comparing the benefits that he would be likely to enjoy by staying in the existing scheme with what he might have if he transferred it. This compared not just the pension, but issues such as tax-free lump sum and death benefits. We were able to show him that the critical yield – the growth rate that would be needed for the pension to match the existing benefits if it was transferred – was fairly reasonable. This gave Ian comfort that he could proceed without too much fear that he would be essentially risking his entire financial future on the success of his business.

In parallel with this, we started the process of liaising with a new self-invested personal pension (SIPP) provider to accept the transferred funds, and with Ian’s solicitor. This made sure that, as soon as we were happy to recommend the transfer to proceed, the legal work would be suitably advanced. Plans were also submitted to the pension trustees to make sure that they were happy, so that work could begin right away on completion of the purchase, and that they could agree how much of the work could be paid for from the pension fund (most of it).

Ian has a shiny new office so that he can get on with growing his business. He didn’t have to borrow a penny and rent his company is now paying is effectively being paid to himself, into his pension. Incidentally, the funds were in place within the six weeks, although the formalities did take a few weeks longer.